Empowered by our successful efforts in reaching children affected by civil war and unrest in Sri Lanka, CEI continues its mission of empowering children in need in Uganda.  The country's tragic history of military repression, guerilla warfare and human rights abuses over the last 30 years has left half a million Ugandans dead and uprooted 1.6 million refugees. Consequently, children have been exploited for military purposes and are being orphaned in record numbers by the violence & HIV/AIDS epidemic.  CEI brings invaluable experience to Uganda after working in war-ravaged Sri Lanka for nearly 15 years, supporting educational projects that serve more than 6,000 Sri Lankan children daily; most of which suffer with varying degrees of Post Traumatic Stress Disorder (PTSD). 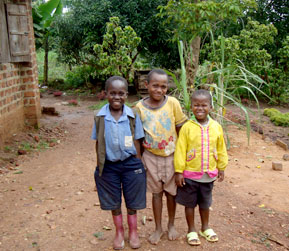 Uganda currently has over 2 million orphaned children.  The majority are orphaned by HIV/AIDS (Uganda Poverty Status Report, 2011). This number is expected to rise in the next decade, increasing the risk of children having to live on the streets and becoming beggars. These children then become susceptible to exploitation like sexual abuse, child labor, and child trafficking.

Donate to CEI, Uganda - CEI is looking to purchase property, which will be used for a Leadership Academy project that will function as a residential care facility for orphaned Ugandan children.

Find a child to sponsor